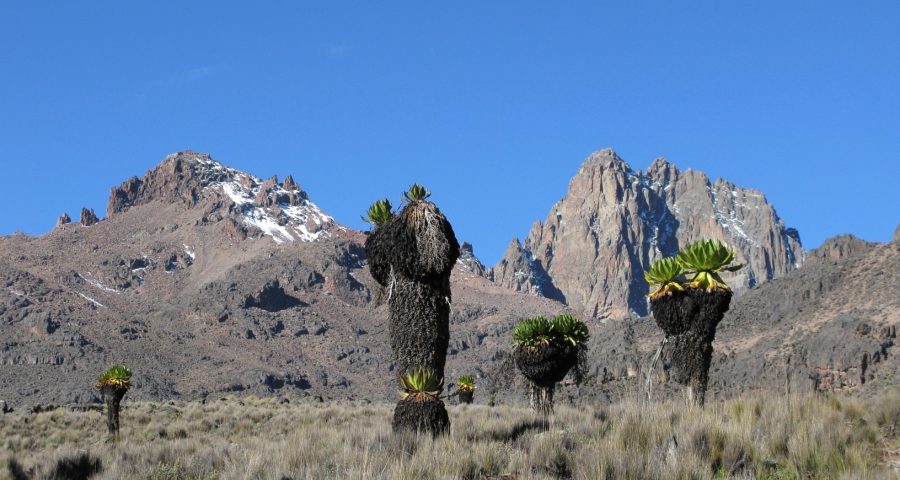 This traverse of Mount Kenya combines an ascent on either the Sirimon route or the Naro Moru route on the western side to Point Lenana and a descent of the Chogoria route on the eastern side of the mountain. In total it takes five days and reaches a high point of 4985 metres over a trek of about 50 kilometres. It is not a technical climb to Lenana but there is some high altitude walking and scrambling just below the summit which is sometimes on snow and ice.

The Sirimon route is considered a more gentle approach with its slightly longer path gaining altitude from the northwest of the mountain more slowly than the Naro Moru route. However a huge forest fire recently means that the first day is no longer through beautiful forest, but on an open track through a recovering landscape to Old Moses Camp. The path then follows the line of the long classic glacial MacKinder Valley up to the high camp (Shiptons) under the summit spires of Batian and Nelion. The summit itself is reached on scree and rocky paths (leaving in the dark at about 2am), which eventually become snow covered as they edge alongside the Lewis Glacier. The final few metres requires a bit of a scramble to reach the shapely summit from where dawn shows the plains of Kenya far below and the amazing silhouette of the two main peaks of the mountain just close by.

The ascent by the Naro Moru route starts from the west side of the mountain near the market town of Naro Moru. There is a track that can be driven from the local hotel we use (Blue Line) up to the park gate which passes through farmland and small villages on the lower slopes of the mountain. At the park gate we continue on foot up to the Met Station which is just at the top of the dense bamboo forest and offers a much better chance of seeing some wildlife than the Sirimon route. The campsite here has huts and is a perfect place for even a short overnight weekend trip to Mount Kenya if you don’t intend to summit. From Met Station the path continues up the notorious Vertical Bog, which is not vertical at all but can be quite boggy, particularly in the afternoon! It opens out onto open alpine heath with beautiful views of the summits from Picnic Rocks on the edge of an escarpment that drops down into Teleki valley and a few hours walk up to Mackinders Camp. The final ascent to Point Lenana requires a 1am start and a short trek to reach the start of the scree slope that leads to the Austrian Hut. From here the ascent has an exposed path on the summit ridge but they’ve recently put in fixed lines (making Mount Kenya the highest current via ferrata route in the world) to give people that confidence to reach the summit without any issues.

The descent by the Chogoria route, generally considered to have the most spectacular landscape and geological features of cliffs cirques and lakes, is long but worth it (especially on the descent) for far reaching views of high lakes and glacial tarns, deep gorges and unusual rock formations. One particular enormous amphitheatre of cliffs called The Temple holds the beautiful Lake Michaelson. Camp is further down near Nithi Falls and past Lake Ellis from where you can climb to local high points to see back to the peaks and strange volcanic formations such as the “giant’s billiard table”. The next day is a glorious descent to the forest and it’s possible to get picked up at a small road head for the last few kilometres to the Meru Bandas at Chogoria gate (this pick up needs to be organised in advance). From there, the 4×4 takes you down the muddy track to the town of Chogoria and on to Embu, which is a market town on the east side of Mount Kenya. 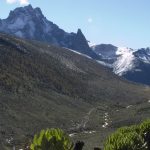 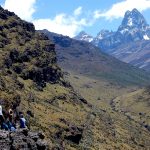 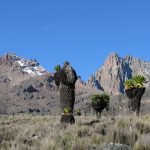